This page contains illustrations describing  the upper layer ocean circulation processes for the pilot areas associated to the four themes of the project.

The sea state conditions in the greater Agulhas Current region are known for periodically  presence of localized extreme waves that are rarely properly forecasted. With the frequent formation of low pressure systems in the Southern Ocean distinct swell fields are often propagating into the Agulhas Current region where they interact with local wind seas and the intense and variable currents and eddies. The likelihood of wave-current refraction and presence of abruptly changing wave height and wave propagation direction as well as crossing seas is therefore large as revealed in the satellite data shown in Figure 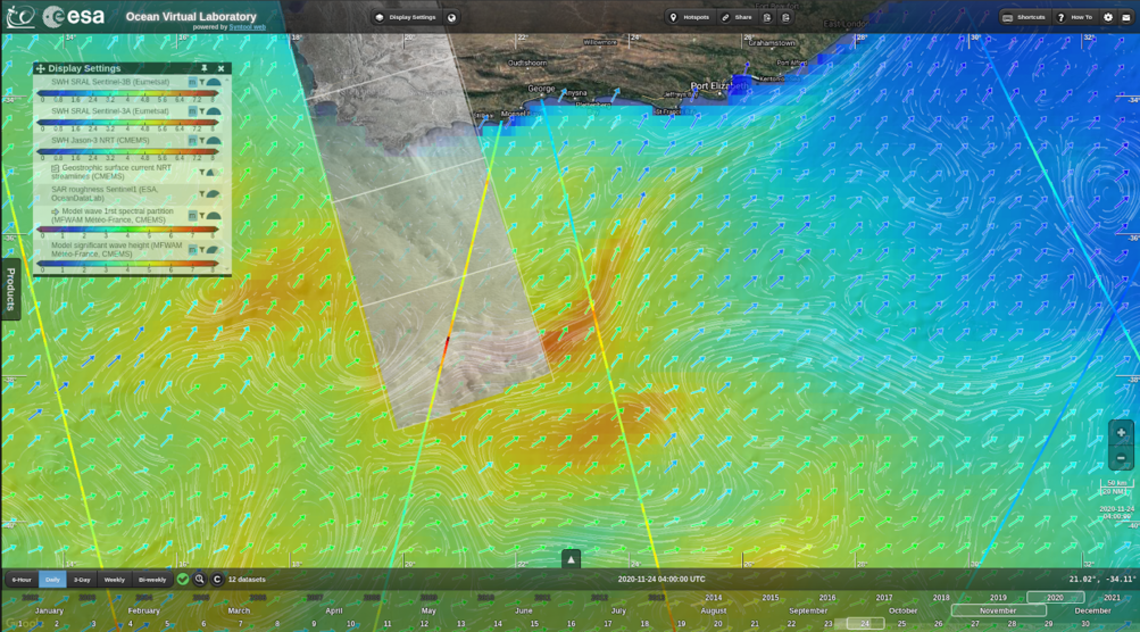 Mesoscale (and sub-mesoscale) features are ubiquitous in the global oceans. They consist of meandering currents, swirling eddies and thin filaments, that are generated by a wide variety of dynamical processes (e.g. instabilities of the fronts where different water masses get in touch, current-topography interactions, air-sea interactions, etc.). In the example below, the geostrophic surface current streamlines estimated from satellite altimeter L4 data clearly identify this mesoscale “turbulence”. They are here overplot to a background SST estimated by interpolating measurements from different sensors. Many cyclonic and anticyclonic structures are visible all over the domain, including the area of the Sargasso Sea where European eels reproduce (around 25°N-65°W). These processes are hypothesized to play a crucial role in the dispersal of eels’ larvae towards their recruitment areas. 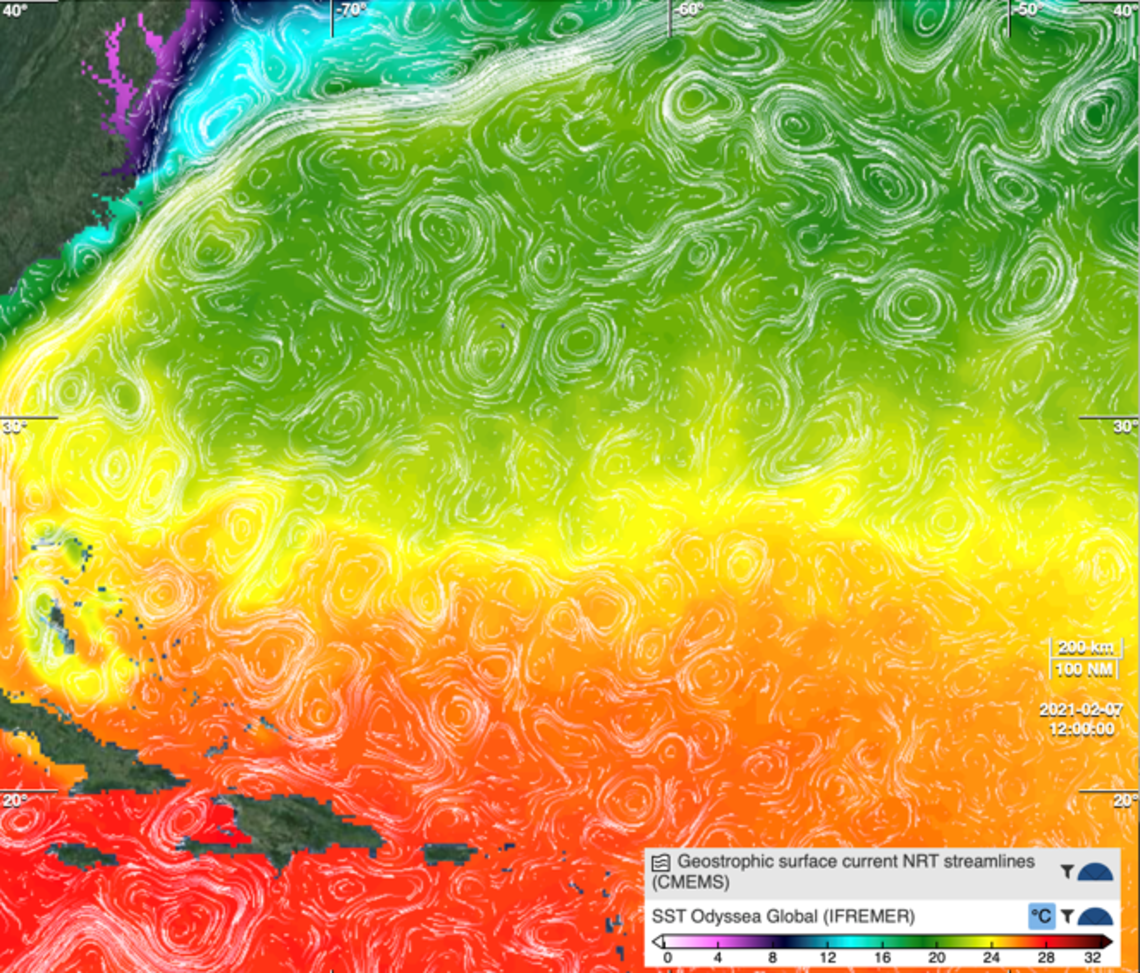 The example image below shows how the drifters (blue trajectories) follow the main direction of the geostrophic surface currents streamlines, but are affected too by inertial oscillations.  Surface current products that resolve these high-frequency motions are necessary to better understand the pathways in this region. 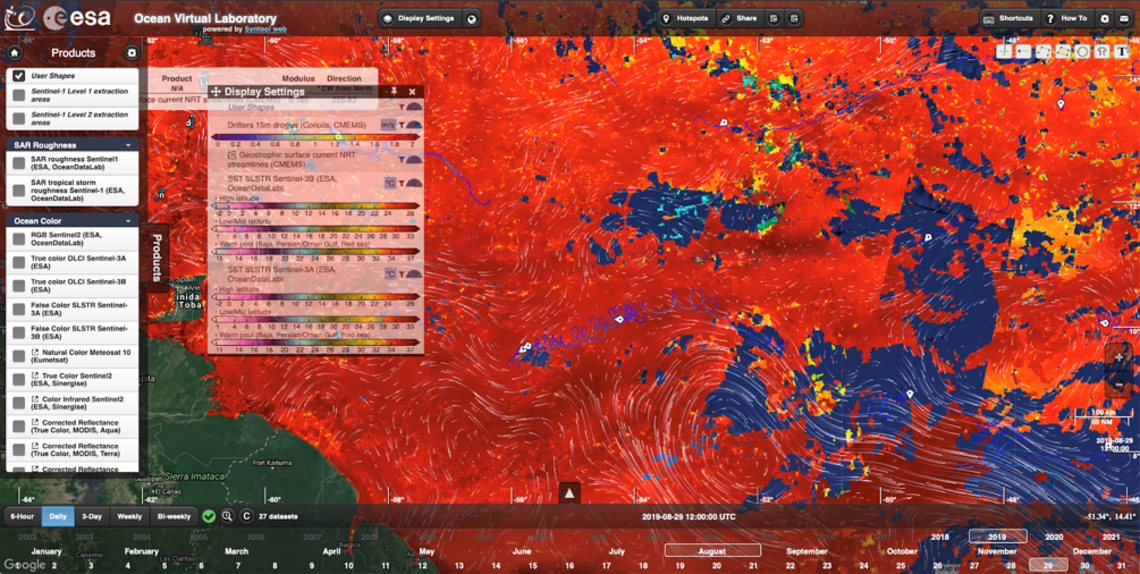 The two examples presented below are both evidencing the promising capabilities to derive radial surface current estimates at a spatial resolution of 1-3 km from the Sentinel-1 A/B based Doppler shift observations of both coastal currents (Figure 21) and western boundary currents as associated with the greater Agulhas Current regime (Figure 22). In obtaining these results an attitude bias correction is highly necessary. Moreover, as the Doppler shift is sensitive to the total motion of the ocean surface it is also important to invoke reliable removal of the wind- and wave-induced contribution to the total surface motion-based Doppler shift. This can be managed by accessing direct observations and/or model fields. In anticipation of operational Sentinel-1 A/B SAR-based Doppler shift observations with attitude bias corrections, the twice daily (for high-latitude regions) derived high spatial resolution RVL maps from Sentinel-1 will strengthen the monitoring system of ocean surface currents, and become invaluable for validation and assimilation in numerical ocean models. 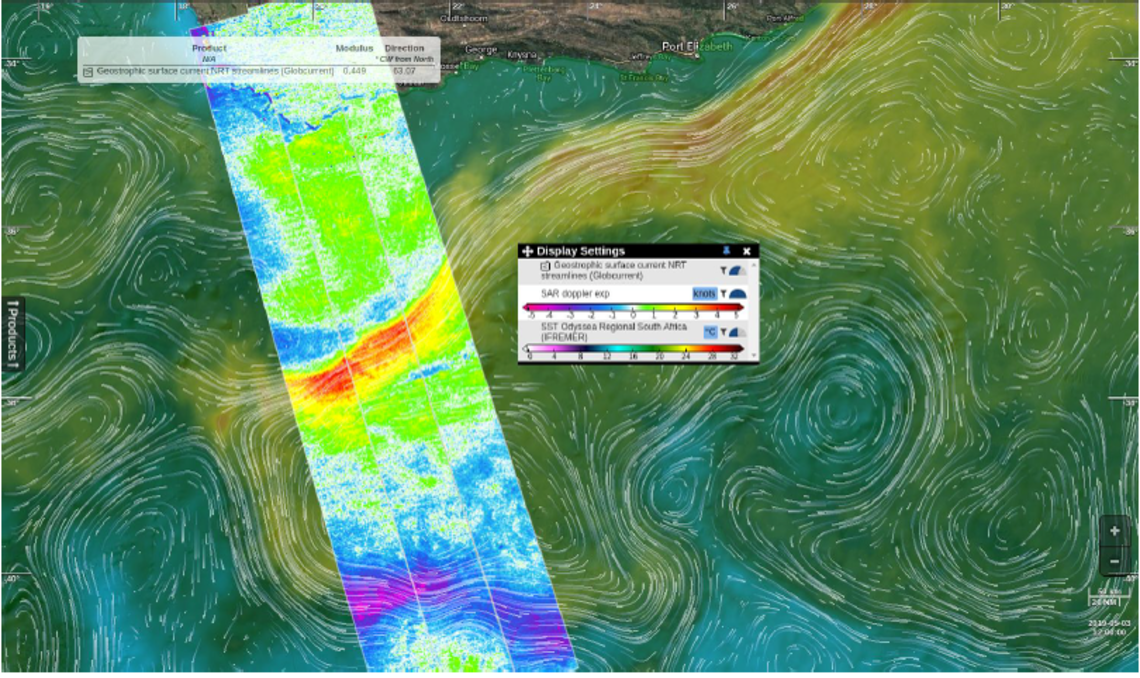